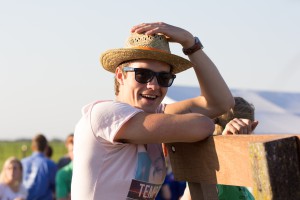 Are you starting a study at the CAH Vilentum next year and do you think you want to become member of the student association USRA? That’s possible!!

To become member of the USRA, you have to sign up for the USRA workweek. This will be the 34th week of the year, and lasts from Sunday midday, till Saturday morning. There are two ways to sign up:

To become a full member of the association, all the freshman have to do the USRA week and the BIP week. In the USRA week you have to work for five days, to raise money for the USRA. In the evening there are activities, parties and games. By working all together for a whole week the group of freshman become a tight group. Also by raising money, Usra is able to keep the fee for the next year’s low.  In the BIPweek there are also many parties and games on the agenda. In the last night, there will be an inauguration. After this, all new members receive their diploma, and are officially appointed USRA member.

If you are already studying at the CAH, you can still become member whenever you want. All you have to do is fill in a contract at the USRA tower (in school), and pay 129 euro (fee+ security deposit). After you do the USRA week and the BIPweek you can get back your 100 euro security deposited money. From that moment on, you will be full USRA member.

Described underneath are the subscription fees:

Attention: if you terminate after 30th of June, you will still have to pay a year of fee.