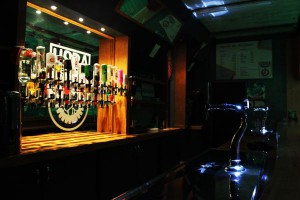 Ad Libitum (or SooS)  is the society of the student association, located at the Educatlaan 39a, Dronten. The current location is used since December 2013.

On almost every  Tuesdays and Thursdays, the SooS is open for a party, organized by; Student houses, Disputes or committees from the USRA. Each party must have a special theme like the notorious transvestite party (just for fun of course) or a foam party with foam cannons. Most of the times these party are with live music.

In the SooS there are special meeting rooms that can be reserved for a USRA related Meeting. The meeting rooms are available from 19:00. If you would like to have a meeting in the SooS, contact Jorick Lambers.

Several times a year, there are special parties, also accessible for not USRA members. You can bring friends from home to these party’s so they can have a taste of the good atmosphere we have at our party’s. The Sunday’s, Mondays and Wednesdays are the more ‘’quiet’’ nights at the SooS. For these nights there is a pool table available or you can just have a nice beer with friends.  For these days there is the ‘’van Harten’’ café, inside the SooS. For all these days the SooS needs tappers. So if you are interested, you can join the Tappers. To sign up and for more information contact Suzanne Willenborg.

In the 90’s the idea of a club building for the USRA grew. This, so that the USRA was not dependent on the school and so that there would be less conflict with school after a party organized by the USRA.  For this, a number of options were viewed: collaboration with jongeren19nu, owning a building or co-operation with a disco from Dronten. To investigate all this, a group named ‘’workgroup SooS’’ was set up in schoolyear ‘95/ ’96 set up.

This resulted in a private club ‘’USRAtijd’’ from February 9, 1999, located at Educalaan 43 in Dronten. The original function of the building was a gym. The complete interior was rebuilt by hand by students. After these major changes were done, the SooS could be opened. This was done by bringing a barrel of beer to SooS. This barrel was picked up at the Bavaria factory in Lieshout. This barrel was brought to the SooS with the USRA bike and on February 9, 1999 the USRAtijd was born. After  the SooS was opened, many good party’s followed.

After several years, the owner of the building wanted to expand its fitness center. Therefore, the contract with USRA was not renewed. We started looking for a new location for the SooS. Eventually we signed a partnership with youth association Nirvana. Together we built the Youth center USRA- Nirvana at the current location, Educalaan 39A. The entire interior/ facility was done by our members, from the painting to creating the bars. The new building was opened in December 2013 and in February we officially moved from the ‘USRAtijd’ to our new premises “Ad Libitum”.